I’ve collaborated with amazing people on a wide range of interesting projects. 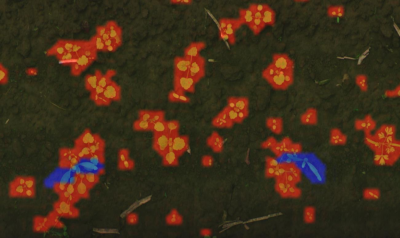 At Deepfield robotics we developed the technology for autonomous vehicles to improve conventional and organic weed management as part of our mission to sustainably increase agricultural production whilst minimizing environmental impact. Effective weed management is crucial to maximize crop yield. We developed small light weight robots, technology to distinguish crop from weed and various methods of destroying weeds. 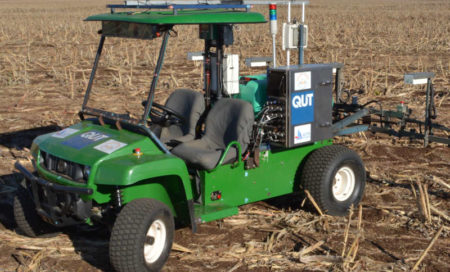 Farmers are under growing pressure to increase production to feed a growing population, while at the same time considering environmental impact and constraints on land, water and labour. The increasingly larger farm machines cause significant soil compaction damage and are a single point of failure. Hence, in this project we developed the technology for small, inexpensive, cooperative robots for agriculture. This project was comprised of five themes: vision-based obstacle detection, vision-based [...] 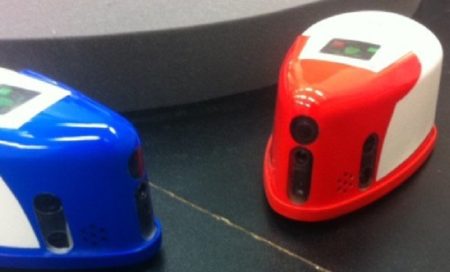 The iRat (intelligent Rat animat Technology) is a rat animat robot designed for robotic and neuroscience teams as a tool for studies in navigation, embodied cognition, and neuroscience research. The rat animat has capabilities comparable to the (then) popular standard Pioneer DX robots, but is an order of magnitude smaller in size and weight. The robot’s specifications are: approximately 0.08m2 with a mass of 0.5kg, camera sensor, proximity and odometry sensors, [...] 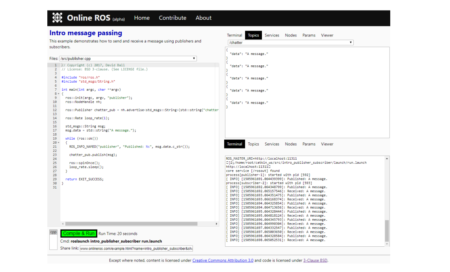 Online ROS allows people to view, edit, compile and execute ROS code in the browser. It is also supports shared collaborative coding. This could be used for online ROS based interviews, in teaching environments and to store complete working examples. It uses NodeJS for the server, Ace for the web based editor, docker for isolated execution, robot web tools for communicating between ROS and the browser and Yjs for shared coding. Available open source at https://github.com/davidmball/online_ros 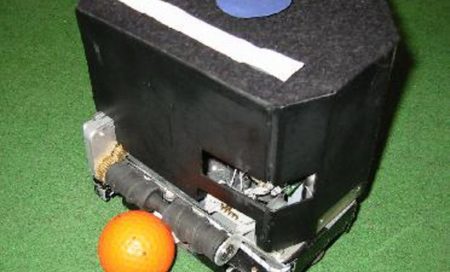 The RoboRoos Robot Soccer team competed in the Small Size League of the annual RoboCup competitions. The goal of the RoboCup federation is "By the year 2050, develop a team of fully autonomous humanoid robots that can win against the human world soccer champion team."  The rules are similar to the human version of the game (FIFA), other than the elimination of the offside rule as well as modifications that accommodate [...] 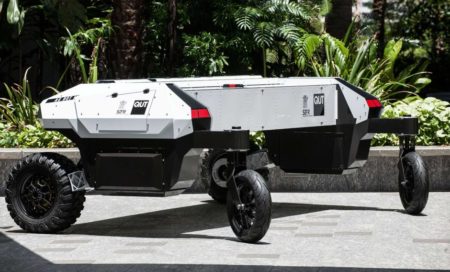 This project is fast-tracking robotic technology for farms. Its purpose is to reinvigorate agriculture through increased production and reduced costs. Such technology can be used to conduct autonomous multi-vehicle operations in applications of weed management, fertilising, and seeding. The use of multiple, cost-effective field robots can enable alternative weed destruction methods such as mechanical, thermal or chemical. It can also enable autonomous methods for picking fruit and vegetables. The Strategic [...] 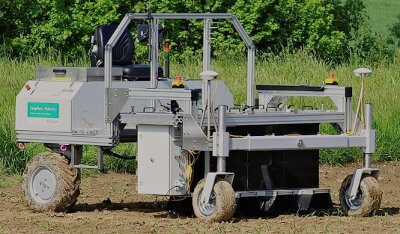 Seed breeding is a critical part of agriculture and ensures food security through the development of new crop varieties that are higher-yielding, disease and drought resistant and adapted for each region. Best practise is to have breeders measure and record traits across a large number of seed trials. However, it is hard to get consistent measurements across breeders especially across different regions. There are also limits to what a person [...] 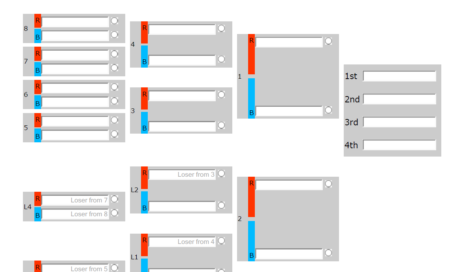 The Martial Arts Tournament System (MATS) is a complete open-source system to manage the running of a tournament. MATS' features include: online registration for coaches, tools for divisioning, entering and printing various results. support for a broad range of division types including: sparring, patterns, round robin, special techniques, power breaking, and a wide variety of team events. MATS has been used for approximately 15+ national and international tournaments with several thousand [...] 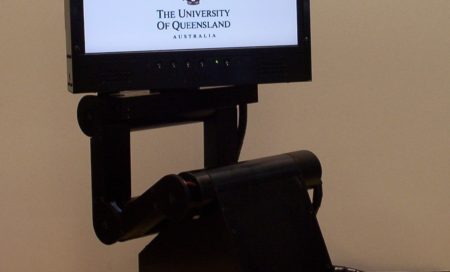 aka Robot Arm for Video Screen Manipulation The goal of the SAParm Project was to produce a proof-of-concept robotic video conferencing system to convey gestures of a remote conference participant. It could mimic human gestures such as nodding and shaking its head; show interest or strong feeling by moving forward; and indicate disinterest by moving backwards. It also moved in a very natural way by first turning its head, followed by [...] 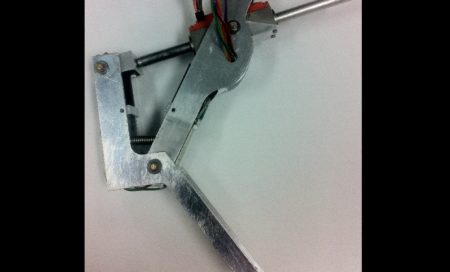 aka energy efficient legged locomotion The goal of this project was to create a new generation of legged robots that can traverse over rugged terrain in an energy-efficient manner. The team designed and tested a new energy efficient joint mechanism suitable for the robot’s knee. In particular, the joint’s stiffness can be changed on the fly so that it can cope with ground of varying hardness. We also demonstrated that [...] 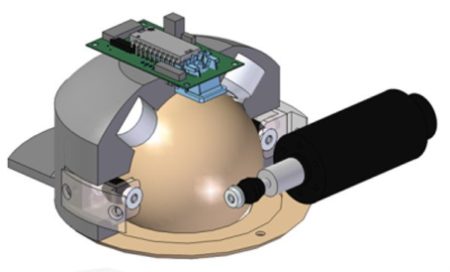 Robots comprised of an omni directional drive system have a distinct kinematic and mobility advantage over the standard differential drive and Ackermann (car-like) drive. In this project we designed an omni directional drive robot with very high mobility that can negotiate typical edge and gap traversal obstacles in an indoor environment. It is based on a novel spherical drive mechanism which has the advantage of continuous contact with the ground plane to reduce [...] 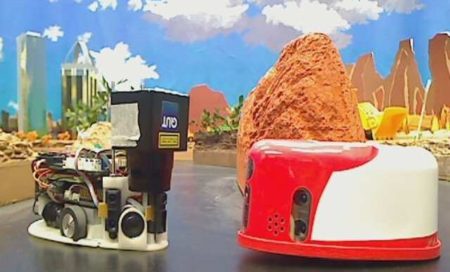 Lingodroids are language learning robots that play games to construct shared lexicons. These fascinating mobile robots have learnt lexicons for places, distances, directions, and time. Our latest work demonstrates how to handle referential uncertainty, that is, how to resolve a word’s meaning between multiple candidates. Further, we have demonstrated language learning between robots that have different embodiment and cognitive capabilities. They differed in their sensors (camera images versus laser ranges); [...] 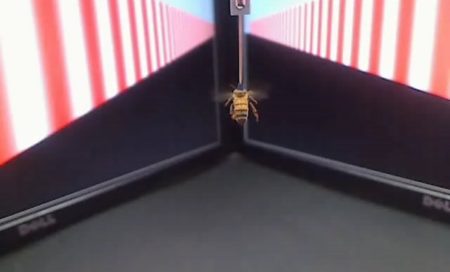 Scientists are trying to understand insect behaviour. To assist we developed a virtual world for Bees. This virtual world consisted of up to six monitors surrounding the Bee along with a controllable platform. We have a virtual display running across up to six monitors @ 1920 x 1200 @ 60 Hz. Using a Python interface the neuroscientists could configure the textures, windows, ground, camera pose, etc. A LEGO mechanism allowed the [...] 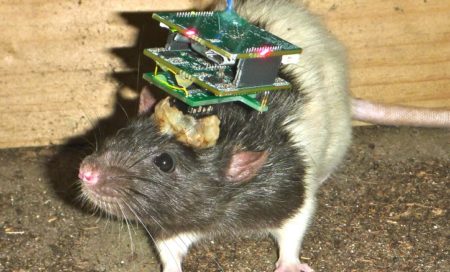 Extracellular recordings in animals, made using wire implants within the brain, detect changes in the extracellular voltage when neurons discharge. Typically, electrophysiologists tether their rodent to their neural recording equipment which limits the range of possible experiments. In this project we designed a digital wireless neural telemetry system, Rodent Scope (RoSco), which enables new experiments such as neural recordings from rodents in large outdoor environments and social experiments. It is small, [...] 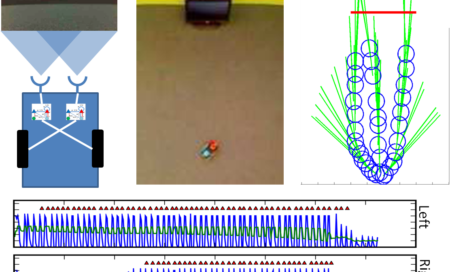 In this study a spiking network controls the iRat in real time. The study demonstrates how the neural controller directs the rat animat’s movement towards temporal stimuli of the appropriate frequency using an approach based on Braitenberg Vehicles. The circuit responds robustly after four cycles when first detecting a light pulsing at 1 Hz, and rapidly after one-to-three cycles when primed by recent experiences with the same frequency. This study [...] 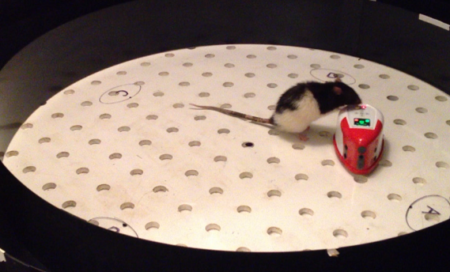 Rats have long since been used in a wide range of behavioral studies. This project is ongoing work to use the iRat as modeling platform for neuroscience studies, for testing neural models of bio-inspired navigation algorithms and for behavioral studies showing rat-robot interactions. Many of the rats observed the iRat, peeping over the wall to check where it was, and often tracking around behind it. Over a period of four days, five [...] 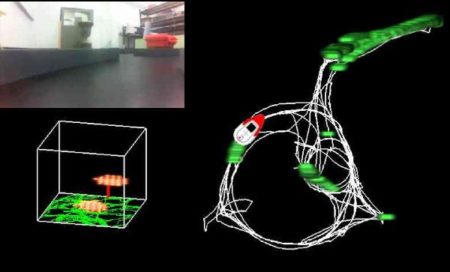 A Rat in the Browser

A telerobot, is a telepresence device that allows a user to interact with a robot over the internet. There are few active public telerobots on the internet. This work describes a new Internet telerobot framework suitable for autonomous mobile robots and designed for user edutainment. Users could give the robot navigation goals. The results demonstrated a reliable autonomous mobile robot system that, within 24 hours of continuous operation, reached 447 goals, traveled [...]

OpenRatSLAM, is an open-source C++ (ROS / OpenCV) and MATLAB version of RatSLAM. RatSLAM is a robot SLAM system based on the neural processes underlying navigation in the rodent brain, in particular the hippocampus. 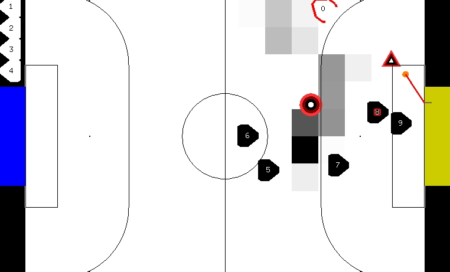 Reading the Play – Adaptation by Prediction

My PhD thesis project was “Reading the Play – Adaptation by Prediction”.  The basis for the approach was akin to an elite sports player being able to "read the play", allowing for decisions to be made based on predictions of likely future outcomes. Using Markov chains we could model the opponent behaviour to prediction their likely future state. This brief video shows the prediction system at work in the RoboRoo robot [...] 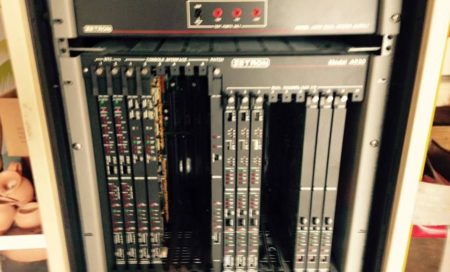 RoIP or Radio over IP is Zetron's next generation network for mission-critical communication gear. For reliability IP systems can be designed for multiple redundancies, especially by spoofing Ethernet switches with ARP packets. This can allow seamless failover of voice calls over IP devices. Zetron, a subsidiary of JVC Kenwood Corporation, designs mission-critical communications solutions for public safety, transportation, utilities, and manufacturing throughout the world. They have an office in Stafford, Brisbane, Australia with [...]