Scientists are trying to understand insect behaviour. To assist we developed a virtual world for Bees.

This virtual world consisted of up to six monitors surrounding the Bee along with a controllable platform. We have a virtual display running across up to six monitors @ 1920 x 1200 @ 60 Hz. Using a Python interface the neuroscientists could configure the textures, windows, ground, camera pose, etc. A LEGO mechanism allowed the Bee to stand or fly. Using this system the neuroscientists managed to find a novel visual streamlining response in Bees.

This then formed the beginning of Gavin Taylor’s PhD project, which I co-supervised with Mandyam Srinivasan and Tien Luu. He went on to add force sensors, wind tunnels, trackballs, etc. Gavin was able to show that the streamlining response was also modulated by air flow. 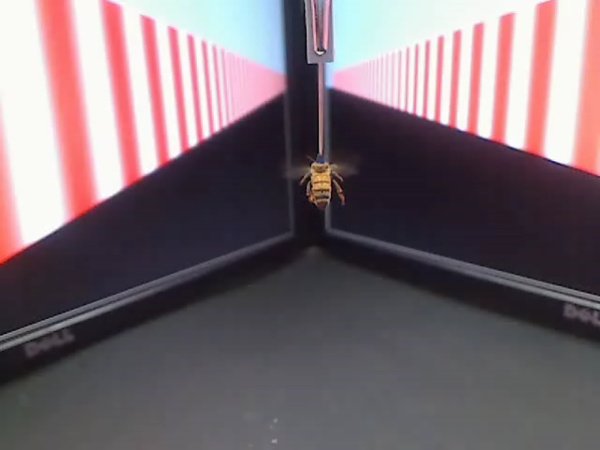 Bee behaviour controlled by the visual flow. The Bee is located between 4 -6 monitors.

G.  Taylor, A. Paulk, T. Pearson, R. Moore, J. Stacey, D. Ball, B. van Swinderen, M. Srinivasan (2015) “Insects modify their behaviour depending on the feedback sensor used when walking on a trackball in virtual-reality”, The Journal of Experimental Biology, jeb. 125617.